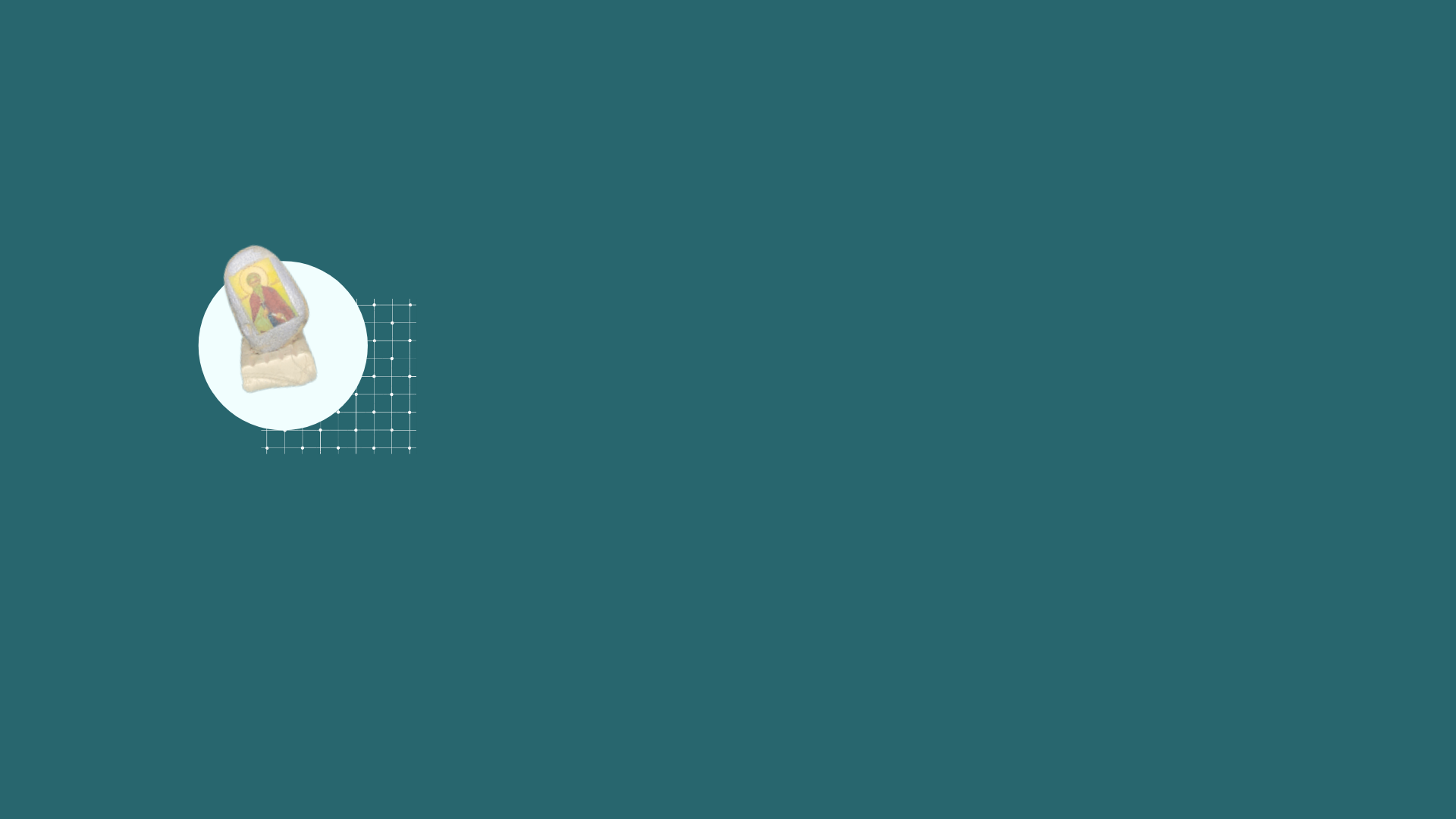 The spiritual stone represents Orthodox Christians icon that serve as a visual reminder to pray. But praying “to” an icon is considered improper because this would turn it into an idol perhaps pagans believed that objects had magical properties.

“I’ve been standing for more than an hour in a monastery near my hometown Sofia. My mind is lost and confused, my eyes are dark and empty. Exactly four weeks ago I lost two family members in one month from the pandemic COVID-19. That day I realized how serious the situation was and how vulnerable we were. For that reason, I decided to visit a place that may help me to restore my peace of mind”.

My chosen object is a spiritual stone with the image of a Saint painted on it. It has been important to me during the pandemic because I feel proud to be an Orthodox Christian and my faith gives me a sense of protection from diseases, sickness and death. Besides the Covid- 19 lockdown which brought me to a state of extreme anxiety and fear of the number of deaths that I witnessed, the spiritual stone made me believe in something powerful which is not of material nature unlike medicine for instance. Such objects with spiritual significance often provide people with consolation and hope in times of trouble and difficulty. “Objects are subjects of biography, which developed a life trajectory with us”. (Hoskins 2006, p 79).

It is not uncommon for people to look for spiritual guidance and inner peace when nothing else seems to help and the situation appears to be hopeless. The spiritual stone is a symbol of something bigger and mightier than us, than circumstances and life itself. According to Hoskins (2006) Certain ritual tools – the‘possessions of the ancestors’ – were believed to be  repositories of  magical power which could affect the processes that they came to represent.:‘Power objectified  in  a  concrete  object  preserves  an  impression  of stability  even  when  the object comes into the possession of a rival; thus, it can legitimate usurpation while maintaining a fiction of continuity’(1993:119).

The stone is a small oval-shaped object and is easy to keep in my pocket. The size of it is no more than 2×3 cm, natural grey colour except for the colourful picture of a Saint that has been painted on the larger surface of the rock. The colours that illustrate the Saint are red and yellow (gold) which are typical for Christian art (Henderson, 2004). These two key colours often appear in religious iconography. Red is the colour of Pentecost and symbolizes the Holy Spirit and during the Medieval period it represented the blood of Christian martyrs. Yellow(gold) symbolizes hope, light, and purity (Henderson, 2004).

When my eyes discovered the stone I said to myself:  “Can I take this stone with me? I need it.” “I found something to protect me”. There is no explanation, but I felt heightened energy radiating from the stone as I approached towards it. I have realised that the energetic field is felt the strongest if I hold it with two hands…or I have it all the time in my pocket. Sometimes I hold my little stone up to my forehead because it is always cold and I get the full effect, like an instantaneous overwhelming feeling of calm and relaxation, sleepiness even. Through the interaction with objects our senses can cause feelings and emotions. Janet Hoskins claims that “things have agency because they produce effects, they cause us to feel happy, angry, fearful orlustful” (p. 76), and as a result, they cannot be understood without their story, their narrative of life, their biography in relation with “their” human being and what they cause to them.

Stone as one of the main material for producing objects with spiritual significance has long been established in human history. Its physical properties such as size and shape make it easy to handle whereas features as hardness and inflexibility might have a symbolic meaning. It often has highly emotive and subconscious effect on the handler which might be closely connected with its material qualities and their sensual effect on the person who is holding it. As the American historian Bernard Herman suggests this is one possible object-centred approach to studying the significance of spiritual stones Lately, I’ve been feeling constantly tired and anxious, and every time I see people coughing or sneezing, I have a panic attack. I found an article to read and the author explained that the theory behind how crystals and stones work is somewhere between science and mysticism. “Stones conduct electricity,” (Bess, 2017). For instance: Watches use quartz because the stone is piezoelectric, which means it can generate an electric current. When the watch battery passes electricity through the quartz, it vibrates, which is how a clock keeps time. “So some people believe that if you’re wearing a crystal it’s going to magnify the energy around you,” she continued. However there are several theorists to speak in new ways about the agency of objects but Hoskins (2006) has her own definition, in which agency is ‘the socio-culturally mediated capacity to act’ (2001: 110), it is deliberately not restricted to persons, and may include spirits, machines, signs and collective entities (ancestors, corporations, social groups).

History and Social meaning of the Spiritual Stone

I was born and raised in Bulgaria and religiousness is of a great importance and a significant part of our cultural identity. We keep religious objects such as Icons with Saints, Crosses and other spiritual objects to protect us and our homes from any troubles in life. As part of the Orthodox belief system, a Saint is someone who is considered as the “holy one”, someone who is set apart for God’s special purposes. (Harmon, 2013). Such beliefs can also prove to be detrimental because sometimes we may ignore reasonable solutions to our problems.

Within an hour of staying in the monastery, a place where a community of monks or nuns live and pray together, I found myself being given a lecture on culture by an older man standing beside me. He was dressed in a long black robe and he was reading the bible. I knew that he was speaking to me because I was alone. I started looking around and then I saw the small stone with the painted saint. It caught my attention right away and my eyes began sparkling with the light from the burning candles around me. The image of the stone is Saint Ivan of Rila. The priest told me that according to Bulgarian legend he was known to have performed a multitude of miracles to help the people. With his growing number of followers, many young believers and supporters set up camps around his cave, seeking a blessing from him and collecting stones from the cave.

There has been a long standing discussion among scholars regarding the philosophical and religious significance of stones throughout human history. One outstanding example is Stonehenge whose stones have been considered a symbolic representation of religious consciousness and philosophy (Kinsley, 2019). Professor Michael Parker Pearson of the University of Sheffield for instance think stones were landscape for a religious ceremony. According to a new theory by two of Britain’s leading archaeologists, both world-renowned experts on Stonehenge, Professor Timothy Darvill and Professor Geoff Wainwright the purpose of the site might have been different. They are not convinced that it was a place for religious worship alone, they believe that Stonehenge might have been a site of healing.

I turned to the Spiritual stone during these trying times of the Covid pandemic because I have decided that I feel more connected with this object. It was mainly because of the need to believe in a power beyond me. In my experience in times of isolation spirituality can reduce anxiety and depression caused by the difficult situation. In the history of the “World English Bible” faith cured and saved us, so people’s lives changed. This is highly relevant not only to the past of humanity but in our days as well. In reality objects play a significant part in our lives especially during the crisis as Endt-Jones(2020) recognized that and argues that objects can give us comfort, stability and pleasure by seeing, making, smelling and testing. As human civilization evolved, spiritual stones migrated into early Egyptian, Mexican, and Greek history and have been thought to possess healing powers. In our modern world technology makes it possible to create unique digitalized spiritual objects and attach personal meaning to them as we share them with the rest of the world, to see the undeniable beauty of them. As Prown argues the significance and personal meaning we impart on the objects we create represents our unique existential philosophy and reflects the society we live in (Prown 1988, p. 19).

Since I found my peace throw my spiritual stone I like to touch it every night before going to bed because the feeling of the cold surface calms me down and when I look at the saint I feel a surge of positive energy going through my body. My anxiety related to the fear of COVID 19 is lower and my spiritual stone provides me with high levels of hope and optimism which are sometimes hard to achieve and maintain through traditional medicine. 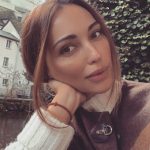 My name is Desi Pavlova, I come from Bulgaria. Currently, I’m doing my MA at Maastricht University.

Endt-Jones M. (2020, May 18). Curating the S(h)elf: Collecting and Displaying Objects in Times of Uncertainty. Cultural Practice.

Henderson, C. (2004) The Significance of Color in Christian Symbolism.

Yearling, R. (2020). Why People believe that religious faith will save them from dieses.