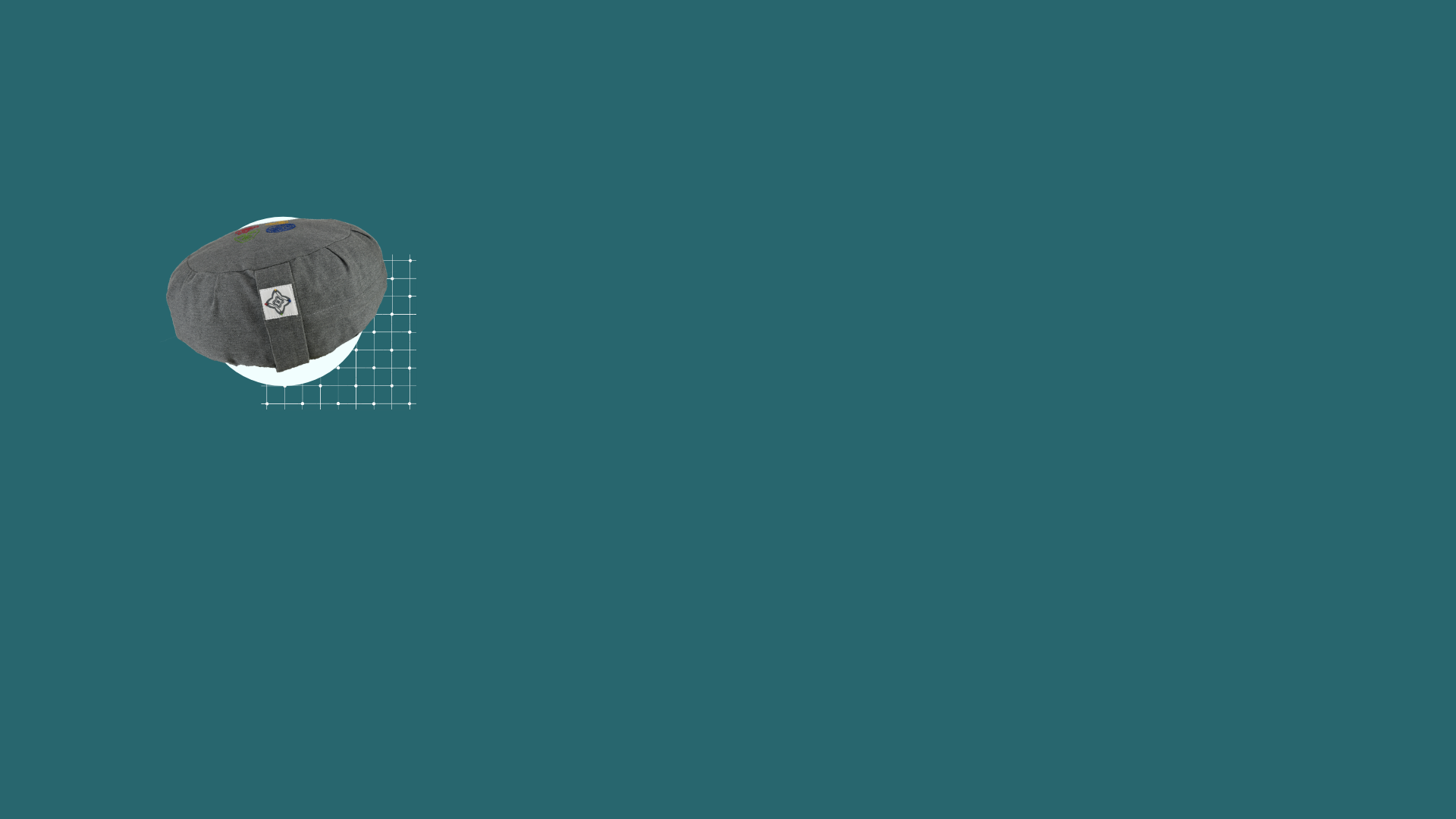 This Meditation Pillow played a central role in my quarantine experience not only by being part of my mediation practice but also as a ‘quarantine art project’ inspired by my favorite childhood TV series.

Meditation Pillow by covid19digitalcollection on Sketchfab

In the middle of July 2020, my family went on a single weekend trip as a replacement for any actual vacation we might’ve gone on without COVID-19 keeping us inside. At some point during the trip, we made our way into a Decathlon store, where my eyes soon fell on a plain grey meditation pillow. For years I had been trying to get into the habit of meditation, but so far my attempts at creating the habit had never stuck. This changed with the start of quarantine in mid-March. Using a variety of apps and videos to build my knowledge on and ability to meditate, I started meditating almost every day. During the first months, my biggest struggle had been back pain, so I didn’t hesitate long about getting it. Soon, meditating with the pillow became part of an almost daily practice.

I lived at home with my parents and two siblings until the end of August, after previously having lived abroad for four years. This meant that, though I was seeing almost no one besides my family, I was also hardly ever alone. So, not only did it serve as my 10-15 min escape from the world, it also played a key role in keeping me from clashing with my family members. On particularly sunny days I would take the pillow out to the balcony to enjoy my peace there, other days I would lay it on my bed, and every so often (if I really needed to be alone) I went to a nearby field to meditate, albeit without my pillow.

Meditation as Self-Care During Quarantine

I was far from the only person to embrace a new self-care practice because of COVID. During quarantine, people across the world started picking up new mental health and self-care habits, including meditation. According to an analysis by Sensor Tower (Chapple, 2020), the top 10 English-language mental wellness apps in the world generated 2 million more downloads in April of 2020 compared to January that same year, with the top performers being meditation apps. After April 2020 meditation only continued growing in popularity as the pandemic continued (Kabelin, 2020).

With the restrictions of the pandemic suddenly ruling every aspect of our lives, people turned to their smartphones more than ever before for everything from entertainment to fitness and shopping, as well as support for their mental health during a time filled with uncertainty and stress on personal, relational, and global levels. Although meditation can be done without any special objects, having a cushion can help avoid body pain (especially for the back).

This type of meditation pillow is known as a “Zafu” and is traditionally used in seated meditation in the Zen Buddhist tradition. It has become popular in the west as a standard meditation pillow, together with the Zabuton (Lanquist, 2021). Though the name refers to it traditionally being filled with material from the reedmace plant (see annotation 1 in the 3D model), this particular pillow is filled with recycled fabric. On top of improving my posture, having the pillow helped shape the daily habit of meditating by making it something tangible to see lying around in my room.

Making it My Own Through Crafting

With excessive amounts of time on my hand and not much else to do, the simple pillow eventually became the canvas for one of my many art projects during quarantine. Later I will go deeper into the subject of the project, but the practice of embroidering, just like many other forms of crafting, was a source of stress relief in itself. Once again, I was not unique in gravitating towards creative outlets during quarantine. As Rosa Inocencio Smith (2020) writes in her article: “I’ve turned to old-fashioned crafts in recent weeks to calm my anxieties, to hold something tangible in my hands and my thoughts while uncertainty swirls around me” (para. 2).

Much like meditation, crafting presents a way to spend the hours of the day while also helping to relax and take a step back from the stressors surrounding us. It doesn’t come as a surprise then that some artists describe the zone they get into when making art as being meditative. Where it differs is the fact that you make something physical. As further discussed in the Health Theme, keeping the body and mind busy to avoid boredom can contribute to easing feelings of frustration and isolation (Brooks et al 2020).

In the words of Smith (2020), to craft something “is both to make something and to make sense of it” (para. 8), turning simple materials like string into something tangible, recognizable, and with purpose. When I decided to customize my pillow with elements from my favorite TV series, I subconsciously decided to connect the fond memories and lessons that it taught me with a relatively new object, and in doing so made it my own. I worked on it in my room, the balcony, the previously mentioned field, and eventually Maastricht after I moved, which is where I finished it. When it was done I felt considerably closer to it. It had gone from ‘a’ meditation pillow to ‘my’ meditation pillow, and the positive memories I have of creating it are carried along with it each time I meditate.

The Relevance of a Comfort TV Series

As mentioned, I got my inspiration for the embroidery on the pillow from the TV series “Avatar the Last Airbender” (AtLA) which aired from 2005-2007. The series follows the journey of Aang, a 12-year-old monk and last survivor of his nation, the Air Nomads. In this world, some people can bend one of the four elements: water, earth, fire, or air. Only one individual, the Avatar, can bend all four elements. Aang is the current incarnation of the Avatar, and with his friends, he strives to end the Fire Nation’s war against the other nations of the world.

I first watched the series as a kid, and over the years it has remained my all-time favorite. Not only is it a beautifully created series to watch, but it also taught me lessons about having an open mindset as a child that I’ve continued to carry with me. The emotional authenticity and maturity of the series is something many other fans point to as well when discussing its strength (Clark, 2018). By embroidering reminders of the series on my pillow I wanted to tie these positive associations to my newly found practice of meditation through something tangible. On the pillow, the four colored emblems represent the four elements (see annotation 2), while the white emblem on the other side represents the “White Lotus” tile, a set-piece from a game featured in the series called “Pai Sho” (see annotation 3).

AtLA is one of the many pieces of childhood entertainment that people returned to during quarantine for nostalgic reasons, to provide a sense of comfort (Ulaby, 2020). This aspect is something that is further explored in the Nostalgia Theme, so I won’t go into it deeper here. Yet, this series presents a unique case, as there were other factors at play that caused it to rise to popularity again during the pandemic. One main reason this happened is that it was added to Netflix, giving many people a new way to easily access the series, whether for a rewatch or for discovering it for the first time. However, it also became a hot topic as its new rise in popularity happened at the time of the BLM protests, when many people spoke out for racial justice and critically reflected upon many different facets of their society and their roles in it. For many viewers of the series, AtLA “became a way to digest those events” (Sonde, 2020, para. 3) providing both a source of comfort as well as a “reflection” of these real-world events. The series deals with many complex themes including oppressive governments and questions of morality. When the protests took place, some fans turned to quotes from the series to express their stance, with the particularly popular quote being “Only justice will bring peace.”

All these factors played a role in bringing AtLA to the forefront of pop culture once again, providing one of the many sources of comfort and reflection I myself and others turned to during the months of quarantine.

With these contexts in mind, let me return once more to the pillow itself. Its original grey cover is made of sturdy cotton, yet feels soft to the touch. The handle that curves around the side makes it easy to carry, as it is of such size and weight that you need two hands to hold it otherwise. There is a zipper on the side so you can take out the loose bag of filling for washing, but the only time it’s been taken out was for the embroidery process. The embroidery string is softer than the cotton, and its bright colors stand out starkly against the neutral grey background. When you go over it with your finger you can clearly feel the risen stitch lines. The french knots at the center of the White Lotus emblem wiggle around when you go over them with your finger. I sometimes do this to fidget with the pillow. After you’ve used it to meditate, it flattens significantly under your body weight, so you have to press in from the sides again to reshape it. With all the experiences I’ve had with the pillow so far–from all the meditations, the crafting of the embroidery, and now also the process of digitizing and reflecting upon it for our digital collection–it carries a lot of positive emotions with it and will continue to be a source of comfort for me long after the pandemic has ended, in a way also serving as a reminder that I, just like my peers and all the others in the world, made it through this time. I find this sentiment once again reflected in a quote from Avatar the Last Airbender, with which I will end:

“Sometimes life is like this tunnel. You can’t always see the light at the end of the tunnel, but if you keep moving, you will come to a better place.”

Iroh, Episode 2.20 “The Crossroads of Destiny”

My name is Marc, I’m from the Netherlands. Currently, I’m doing my MA at Maastricht University.

Clark, N. (2018, July 20). ‘Avatar: The Last Airbender’ Is Still One of the Greatest Shows of All Time. VICE. https://www.vice.com/en/article/5943jz/avatar-the-last-airbender-is-still-one-of-the-greatest-shows-of-all-time.

@jowrotethis (2020, June 22). That being said some #BLM protestors have been using Kyoshi signs and THAT rules. #AvatarTheLastAirbender pic.twitter.com/tYDxoZ2eFA. Twitter. https://twitter.com/jowrotethis/status/1275102084556185608.

Description: The pillow is used for meditations. It helps the user maintain a straightened back while meditating to avoid back pain.