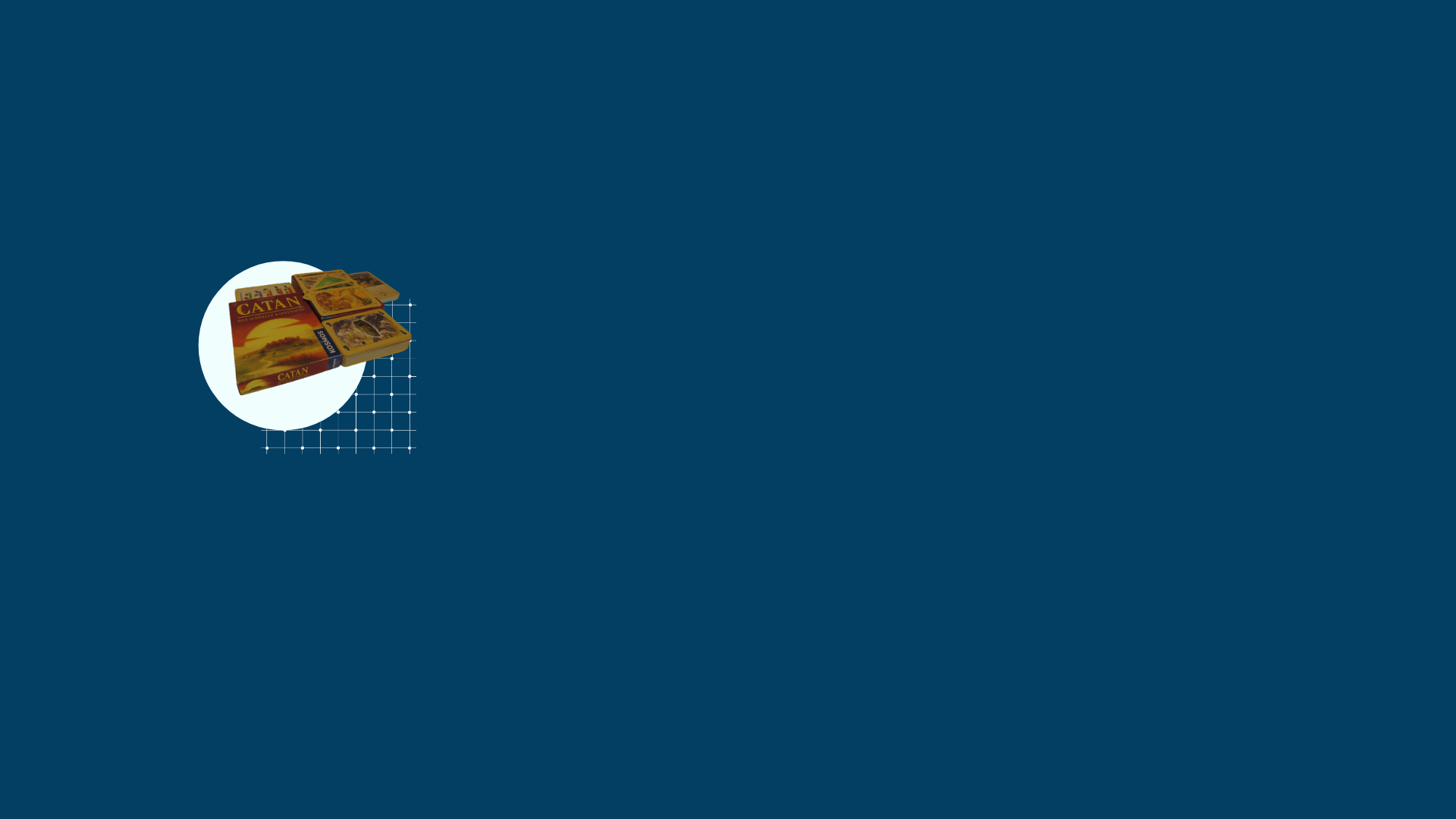 This Catan Card Game played an important role in my daily quarantine experience. It served as a way to recreate my own imaginary reality of time and space, by employing all of my senses to construct a phantasy settlement on the island of Catan.

“Games lubricate the body and the mind.“

Catan Card Game – by Eleni Balaska by covid19digitalcollection on Sketchfab

April 2020: The days started feeling too long and the minutes didn’t go by. Due to the enforced self-isolation, work at home and homesickness became rather frequent, so I always found myself with my cell phone in my hand, scrolling the news or chatting with my family. No matter how many hours I spent in front of a video call to feel less isolated, my mind could not help but be stuck in a loop of all the bad news and the danger that everyone encountered. The wall felt like a divide between me and the rest of the world that seemed like a dystopian place to live. A dystopia that could turn into a utopian imaginary island that calls for discovery and settlement.

It is said that playing board games helps people connect to the past. Catan is not only a link to past memories when family and friends gathered to play a strategic game but also to a promising future, where hope is the main element to keep you focused on the goal of the game. This game works for me as a getaway from a stressful reality, turns my concerns and fears into carefreeness, and challenges the sense of space that I had so far at home. The constant aim to collect the resources needed, to be fast enough to ‘build’ city extensions, and to finally gain all victory points kept my mind focused on a reality ‘constructed’ and controlled by me. This power to distract my attention and help me reconfigure the world outside the four walls of my home was enough to make the Catan card game worth presenting here.

I bought the card game version shortly before the first lockdown, as an enjoyable game for two, fast enough to keep one’s interest, and complicated enough to keep one’s mind busy. It is an empire-building game placing the players in an imaginary time and space of the discovery of the island Catan. Although I used to play the actual board game in the past, the card game edition offers the same emotions during the game and the victory. The piles of card illustrations keep my mind focused on building my own world, while it offers some independence in the way I would play or trade the cards with my co-player. While the paper cards in my hand replace the plastic-metallic feeling of my cell phone, it is amazing how a few cards on the table can ‘construct’ a better world than the one I find whenever I turn on my cell phone.

“Settlers has spread from Stuttgart to Seoul to Silicon Valley…it has become a necessary social skill among entrepreneurs and venture capitalists.“

One of the genres of board games is the “eurogame” or “euro-style game” which refers to games with thought and strategy over luck and conflict linking to economic themes rather than to martial ones (Woods, 2012; The Economist, 2008). After the great success of the “Settlers of Catan” by Teuber, 1995, which won the ‘Game of the Year’ reward, this game became a popular hobby on a global scale among college students, as well as players in tech startup centres such as Silicon Valley (Dorovan, 2017).

Some consider that the information, negotiation, and strategy character of Catan as well as its fast spread beyond the hobby culture has had an impactful role in the formulation of eurogames’ nature (Sousa & Bernardo, 2019).

Beneficial Effects of Board Games

Science considers board games as a beneficial occupation for mental health, such as in perception, cognition, psychological health, and education. Specifically, Nakao (2019) highlights that playing board games is positively related to the prevention and therapy of psychological conditions, unhealthy lifestyle behaviours, and cognition-related issues (p. 1). These games “require players to be proactive and to anticipate, thinking several steps ahead, during play”, thus increasing reasoning and brain function (2019, p. 2). This of course includes the positive impact on humans’ social development. The collaboration in team board games and the use of non-verbal communication (e.g. eye contact and gestures) increase teamwork, creativity, interaction, and social networking (2019, p. 2). An even more beneficial effect is in terms of education; students practice their concentration levels, motivation, and interest, as they learn the importance of following rules, taking turns, working in a team, and focusing for a certain duration of time (2019, p. 2).

Board Games throughout the History

What lies behind the promising role of board games? It is important to highlight their intertemporal value throughout centuries, as well as their contemporary importance during the period of the pandemic as means of cognitive and emotional enhancement.

According to Smithsonian Magazine (2020), long before the Catan board game gained global reputation, various versions of board games occupied the leisure time of the ancient world. To illustrate, in the north-west, the Viking game Hnefatafl was played in Scottish, Norwegian, and Iceland regions, while Senet and Mehen took quite a popular place in Egypt. According to Hinebaugh (2009), early games that have been played for thousand years such as Mancala and Go have created the basis for the creation of most of the contemporary games (p. 4). Ghaturanga, famous as the ancestor of modern Chess, was discovered in the area of India. Military strategy games, starting in around 1300 BC, were played throughout the Roman Empire, as for example the two-player strategic “Game of Mercenaries” or, as traditionally named in Latin “Ludus Latrunculorum”, which is also considered to have an influence on the development of early chess (Attia, 2016; Solly, 2020).

Board games have also linked to the practice of cognitive and creativity skills for centuries. Hinebaugh (2009) highlights that the very first board games dating back to 2200 BC had not only entertainment but also educational purposes (p. 9). Mancala, for example, “was viewed by many tribes in Africa as one of the means to test a boy’s readiness to assume the responsibilities of manhood” (2009, p. 5). Considering that the ‘classic’ or ‘traditional’ games of today are variations of board games that have existed for thousands of years, their educational character is not a new concept. It is, therefore, worth noting that board games are not only introduced in school curriculums, but also lead to the creation of “homeschool organizations, publications, websites, and blogs discussing the use of board games to develop and reinforce core educational skills” (2009, p. 10).

Topics around the benefits of board games in mental health have gained further significance in the context of the Covid-19 pandemic. As Gamasutra (2005) mentions, games are an activity that offers pleasure and positive psychology, as, besides keeping our skills and senses involved, they help players forget about “everyday worries” and change the “perception of time”, by immersing themselves in an enjoyable activity (pp. 3-4). These topics are further discussed in the themes of Escapism and (Re)Constructing Reality. Yet, it is worth mentioning that the migration of all on-site social activities to a digital ‘dimension made analogue board games provide a popular distraction for those looking for “digital detox“, as reported by Deutsche Welle (2021). This seems to have quite a beneficial effect on people’s minds, especially in times of crisis, such as the Covid-19 pandemic and might explain the rise of sales of board games during 2020 (Weisholtz, 2020).

After spending my afternoons on top of the card game, I started investigating different versions of it. Surprisingly, I came across a number of digital multiplayer editions of Catan. Catan Universe, Catan VR, and Catan World Explorers were some of the digitized versions which offered users plenty of different opportunities. Yet, for a person who has been attached to the physical, analogue version of the game, to experience the same feelings in the digital dimension would be debatable.

In literature around the use of objects, terms such as ‘object biography’, ‘aura’, and ‘agency’ have been examined. Hoskins (2006) notes that things can stimulate emotional reactions to humans, specifically to those who make use of them (p. 76). These used objects carry their own narrative of life, a biography, according to their use by humans and their relation to them. Benjamin (2008) defends that the act of assimilation by means of digital reproduction of objects, the ‘decay of aura’, leads to the loss of their uniqueness (pp. 22-23). However, scholars such as MacIntyre, Botler, and Gandy (2004) consider aura a more subjective perception of an object or a place, which depends on the individual and collective significance to particular users (p. 37). Regarding the use of technology as a means of reproduction or even enhancement of aura, MacIntyre et al. (2004) argue:

“Media technologies do not themselves possess aura in the mind of the user; the aura belongs to the object or place. The technology may evoke the aura a person already holds for an object or place and leverage that aura to improve the media experience” (pp. 39).

In a time of crisis, the physicality and tangibility of analogue objects and their impact on mental health are accentuated by Endt-Jones (2020). In her post about the use and collection of objects in times of (personal) uncertainty such as migration, exile, and the Covid-19 pandemic, she notes that objects can facilitate the reconstruction of one’s self and identity. She highlights that “touching, seeing, making, smelling and tasting concrete things” can cause feelings of relief and security over the “great physical and emotional upheaval” of an intangible threat (para. 8). The same reason for which I continued playing this analogue board game during the lockdowns; the reason why this will still help my mind feel security and control, every time the imminent threat of the pandemic causes me to feel like I am on house arrest. 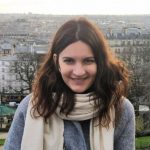 My name is Eleni Balaska. I come from Greece. Currently, I’m doing my MA at Maastricht University.

Benjamin, W. (2008). The Work of Art in the Age of Its Technological Reproducibility, and Other Writings on Media. Cambridge (MA): Harvard University Press, pp. 20-42.

Donovan, T. (2017). It’s all a game: The history of board games from Monopoly to Settlers of Catan. Macmillan.

Nakao, M. (2019). Special series on “effects of board games on health education and promotion” board games as a promising tool for health promotion: a review of recent literature. BioPsychoSocial medicine, 13(1), 1-7.

Weisholtz, D. (2020, December 5). How classic board games are bringing families closer during the pandemic. Today. https://www.today.com/popculture/board-games-enjoy-surge-popularity-during-pandemic-t202377