These running shoes helped me through many days during the pandemic. Besides the added bonus of staying physically healthy, running served as an outlet for me to combat stress and leave the worries about Covid-19 behind.

Running Shoes – by Leah Buchholz by covid19digitalcollection on Sketchfab

The sun is already setting as I step outside. After hours of online lectures in front of my laptop, it’s the first time I leave my apartment today. I secure the laces of my running shoes with a double knot and slowly start moving. The concrete on the sidewalk feels hard under the worn soles of my shoes. I increase my pace, trying to escape what seems like a thousand thoughts that race through my head. My breath is speeding up. Clack … clack … clack… I listen to the rhythmic sound of my feet hitting the ground when I realize: my mind has calmed down.

Health in a Pandemic

Social-distancing, face masks, lockdowns – the implementation of these measures in virtually every corner of the world to keep COVID-19 from spreading illustrates the number one concern of the pandemic: health. In an attempt to escape the many fears associated with the novel virus and to stay active even in times of lockdowns and social distancing, many people – like me – turned towards outdoor activities like running.

What are the health benefits of exercising? Why did running become so popular? And how did the shoes we use for running today come about? By addressing these different questions, this essay elaborates on the historical and contemporary relevance of running in our society.

The Evolution of Running (Shoes)

Walking and running have been humans’ main means of transportation for millions of years. However, academic researchers estimate that footwear did not become common until 27-28.000 years ago, suggesting that people previously walked barefoot (Pinhasi, et al., 2010, p. 4). The invention of running shoes is even younger and dates back merely 200 years, to 1832 (AD), when Wait Webster first patented the process of adding rubber soles to leather shoes, which created a more flexible and cushioned sole (The history of the Sneaker, 2008). However, these first models were not made for long-term use, as the sole quickly became porous. It took another decade until Charles Goodyear developed the method of vulcanization, which eliminated this problem. Vulcanization is a process in which sulfur is added to heated rubber, leading to a transformation of the rubber into a more solid and at the same time elastic form (ibid.). The invention revolutionized the possibilities of shoe manufacturing and was the basis for the production of the first modern sports shoes – the so-called “Plimsolls” (Kippen, 2008).

In line with the developments in shoe fashion, running became more important as a sport. Arguably, this is shown most clearly in the introduction of the marathon discipline at the Olympic Games in Greece in 1896. At that time, however, long-distance running was only practiced by professionals or in the context of athletic sports clubs, and jogging in public was generally considered embarrassing (Scheerders, Breedveld & Borgers, 2015, pp. 1-2). This public perception of the sport did not change until the 1960s when running became a form of expression of the bigger anti-authoritarian, anti-institutional culture. More and more men began to participate in this new-found activity, making it more informal and thus, leading to what Scheerders, Breedveld & Borgers (2015) term as a “recreational (r)evolution [sic]” (p. 2). The growing interest in jogging as a recreational sport was accompanied by two developments in particular. Firstly, the high demand for running shoes propelled the market forward and manufacturers like Nike and Reebok adopted new technologies, creating better-cushioned soles and overall, more advanced running shoes. Secondly, the participation in city marathons sky-rocketed. Road-running events such as the Boston Marathon or New York City Marathon began to attract several hundred men every year (ibid., pp. 4-5).

This raises one important question: why only men?

The phenomenon of modern mass running originated in the US, in a time when the perception of a gender binary was still prevalent, and women were generally considered the weaker sex. Following this mindset, women were considered unsuitable for long-distance running, because it was believed that they were physiologically incapable of long runs. Moreover, people assumed that women would grow big muscles and lose their reproductive abilities, or in other words, that they would become ‛too manly’(Schultz, 2019, p. 6). As a result, women were prohibited from participating in road runs. However, a few female athletes opposed these regulations by crashing various marathon events. Maybe the most famous case is that of Katherine Switzer, who tells her own story in the video below. Switzer (2018) officially entered the Boston marathon, but during the run, a race director tried to forcibly stop her, which was caught by the press. The growing media attention that followed and subsequently increasing numbers of women who found their way into the events, eventually put enough pressure on the union supervising the races to open them up for all (Schultz, 2019, pp. 14-15). Therefore, running became yet another important element in the feminist struggle for equality.

The Significance of my Object

Bobbi Gibb, another “marathon crasher” who ran alongside Switzer, argued that:

Similar to Gibb’s description, I too, feel liberated and free when I put on my running shoes and go for a run. In fact, my running shoes have a two-fold meaning for me. On the one hand, they are simply utilitarian: I put my shoes on to exercise, and they protect my feet and joints from injury. On the other hand, they carry very personal meaning. I bought the running shoes in an Oysho store on a vacation with my parents in Barcelona approximately five years ago. Since then, they have accompanied me to various countries, on different hikes and countless runs. Running enables me to leave behind the stress of my day-to-day life, to switch off and only take in the environment surrounding me. I don’t bring any music, or baggage, just me.  Throughout the years, the shoes have adapted to the shape of my feet so that nothing pinches or pokes. When I touch the black mesh on the front of the shoes with my toes, it stretches slightly upwards. I recall that one winter, where the cold air found its way through the mesh and my feet got really cold. When I turn my foot, the sole, which has lost its elasticity years ago, becomes visible. It reveals small little pebbles that have worked their way into the soft material and have been stuck there since. The sole from my shoes used to be white, but now it’s covered with sprinkles of dirt from all the times I took them on a run.

Especially in times of Corona, the possibility to be active played an important role for me and many others. However, due to legal requirements imposed by the governments, many gyms and sports clubs needed to close their doors, limiting people’s ability to exercise. As a sport that is largely free and can be done individually, running became a popular alternative. Experts have repeatedly pointed out the importance of physical activity for overall health. Running, in particular, has proven to be negatively linked to cancer-related deaths, reducing the risk by 30% – 35% even after controlling for other factors (Lee et al., 2017, p. 46). Moreover, it promotes other healthy lifestyle choices such as drinking little alcohol or non-smoking (ibid, p. 46). A qualitative study furthermore showed that runners repeatedly reported improved mental well-being and reduced stress (Shipway & Holloway, 2010, p. 272). The benefits of physical activity have also been relevant during the Covid pandemic. Cheval et al. (2020) found that people’s mental and physical health suffered from the increase in sedentary behaviour associated with measures imposed during the lockdown, such as home office and online lectures. Contrary, exercise improved the physical health of the study participants (p. 4).

The Authenticity of my 3D Model

Although the focus of this essay has been on my running shoes, the 3D model depicted in this collection is only a digital reproduction of the original. According to the philosopher Walter Benjamin (1936), “the presence of the original is the prerequisite to the concept of authenticity” (np.). In other words, he argues that the uniqueness of an object, its aura, lays in the object’s history. A technical reproduction would therefore result in a loss of authenticity (ibid.). But does that mean that my 3D model is not authentic? Is the visit of a digital collection with reproductions of physical objects less of an experience than that of an exhibition with the originals? Not necessarily, argue Latour and Lowe (2011). The researchers disagree with Benjamin and propose instead that a well-made copy can even enhance the authenticity of the original by adding new dimensions. This can be achieved for example by providing more context or increasing visibility. In line with this argument, the 3D model of my running shoes might be considered an enrichment to the original running shoes. If it wasn’t for this collection, no one would have seen the shoes lying around in my home and no one would have read their story. And when I have to throw the shoes away soon, because they are simply getting too old to be used, their digital reproduction will live on. 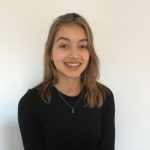 My name is Leah Buchholz, I come from Germany. Currently, I’m doing my MA at Maastricht University.

Latour, B. & Lowe, A. (2011). The Migration of the Aura, or How to Explore the Original through its Facsimiles. In Bartscherer, T. & Coover, R. (eds) Switching Codes: Thinking Through Digital Technology In The Humanities And The Arts, pp. 275–98. University of Chicago Press.

Description: The running shoes from the brand Oysho are used for outdoor running.