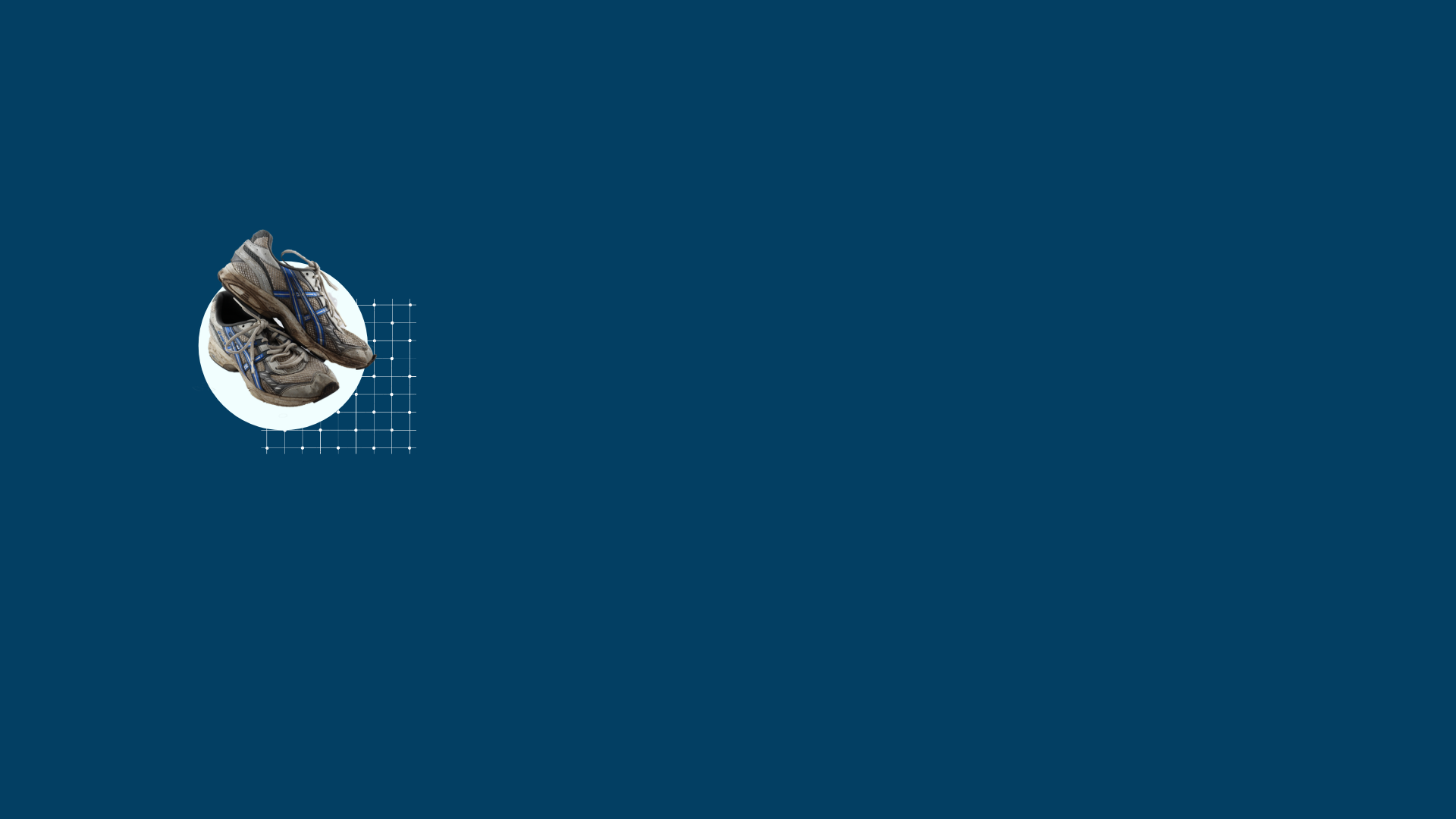 Since the start of the current lockdown, running became a popular activity all around the globe. For many people running became an escape from reality. The mental benefits of running helped millions of people to cope with the situation.

Running Shoes by covid19digitalcollection on Sketchfab

“My brain and feet feel disconnected as I am automatically moving while my thoughts are somewhere else. The tensity and anxiety that I felt before I started my afternoon run seems to fade away. I hear birds chirping around me and I feel the fresh wind blowing in my face. My dark thoughts seem to clear up as I start to feel the intensity of my run. Whilst running for over 25 minutes I feel a certain calmness entering my body.”

My Asics shoes, size 39, that I got from my bonus dad a few years ago became very valuable to me in lockdown. In comparison with most of today’s bright coloured running shoes, my shoes are blue, white and silver and are made of a polyester fabric with a round sole. Back then I was not yet a fan of running. I actually hated it and I never understood why people would run around for fun. But since the lockdown, I felt trapped inside and needed to find a way to clear my mind. After trying out multiple YouTube sports videos I came to the conclusion that I really missed the outdoors. I decided to pick up running. This turned out the be the best decision since the beginning of the lockdown. The moment I started running around, my heavy moods were lifted. The stress and anxiety attacks that I encountered during difficult times in lockdown seem to fade away. After every run I feel relieved, energised an happy. These, mainly muddy, Asics trainers have helped, brought and taught me a lot about coping with mental difficulties in a new surreal reality.

“I never understood why people would run around for fun.”

In the past running had other purposes for early humans. Fossil evidence of these features have shown that early humans started to run around two million years ago. Although compared to other animals early humans were poor sprinters, as research showed that humans performed well during long-distance running which was traced in the skeletons (Bramble & Lieberman, 2004, p. 345). Yet most animals pant in order to cool down while running, whilst humans have a mechanism that can cope with both breathing and cooling down. Sweat. Therefore, early humans developed into great endurance runners (Sears, 2015, p. 10). But why did they run and not walk?

According to multiple studies early humans ran when they hunted for food (Sears, 2015; Lieberman). Early humans were successful hunters because they spend time chasing and exhausting their preys in order to get close enough to catch them (Sears, 2015, p.12). Thus, running was a necessity in order to stay alive and in order to grow into the human kind as we know now (Bramble & Lieberman, 2004, p.345).

A TED talk video on the historical background of running

One can say that it were the ancestors of today’s human race that have evolved the physiological ‘equipment’ for jogging. Features as long legs, large buttocks and springy structures were originated by our ancestors (Science Magazine, 2010).

Yet the first traces of runners wearing footwear came from Greek runners at the Olympics around 776 B.C. while they protected their barefoot from rocks and hot sand. Whilst running here became a sport instead of a remedy to survive.The first sports shoe was invented by Wait Webster in the 1932, as the shoes were made from thin rubber soles and were called Plimsolls. In order to improve the grip of the shoe Joseph William Foster, founder of Reebok, invented the running spikes in 1852. Yet it was only until the twentieth century that modern athletic shoes were invented by Adolf Dasser, founder of Adidas. Moreover, it was only until the 1970s that running shoes found popularity (Washington Post, n.d.).

Nowadays running is not related to survival anymore, but it is more about sport gadgets and burning as many calories as possible (Worrall, 2017). However, running not only holds stigmas like these it is above all a leisure activity that attracts a wide range of people. Running seems to positively affect humans on multiple levels. First of all, studies show that jogging provides significant health benefits (Lee et al., 2017; Lee et al., 2014; Szabo & Abraham, 2012). Running seems to benefit the prevention of chronic diseases and premature mortality regardless of a person’s sex, age, body weight and condition (Lee et al., 2017, p. 53). Secondly, running has an impact on humans mental wellbeing as it reduces stress and anxiety levels and increases the endorphin hormones which lead to the so called “happy” and energised feeling. Besides running on the long term can strengthen your mental health as it increases the personal ability in coping with difficulties (Szabo & Abraham, 2012). Setting goals can be a challenging act in the beginning, but following a path improves the ability to stay calm, dedicated and committed to something. Resulting in stronger and controllable mental power, moreover it gives your brain and self-esteem a boost if goals are accomplished (Major, 2001, p. 16). Thirdly, next to the mental improvements of running it also increases the potential of staying fit. The physical form of exercising helps to burn calories (p.17). Fourth, jogging can improve social affiliation while running around the neighbourhood one can meet other people or run in pairs (p. 19).

I feel a drop of sweat rolling down my face and roll up my sleeves. I instantly feel fit and energised. I speed up my pace. My eyes already meet the front door. I hear myself thinking come on, you are almost there. I speed up again. I hear my heart beating. —BOOM BOOM BOOM—  I made it. Whilst standing in my room I look around and come back to reality. The reality of being home schooled in lockdown. I bend myself forward to untie the laces of my running shoes. I stop. I am looking at how muddy my shoes are and smile. These shoes not only touch the solid grounds of all the places I brought them, but they actually became my solid ground of happiness.

However, running seems to include most the majority’s health benefits, but for some individuals running can cause orthopaedic difficulties or other health related conditions and is thus not a suitable exercise for all (Lee, 2017 p. 52). Besides, particularly women addressed other downsides of running in the outside. The fear of being attacked seems to be a major cost for women. Despite that, the fear of letting oneself down by missing a jog also plays a role as running requires commitment, dedication and perseverance (Major, 2001, p. 22). Yet the fear of injuries, caused by a misstep or a slip, is also taken into account by many runners. Although there are costs at stake, running is overall praised by many people around the world and it seems to be the most cost-effective lifestyle medicine (Lee, 2017, p. 53).

Running in times of Covid — an escape from reality?

Ever since the coronavirus hit, people all around the world were halted in doing any kind of indoor sports or fitness activity. Social distancing became the new standard. But when the number of cases increased many countries responded with immediate restrictions— a total lockdown. People were forced to stay at home in a bid to prevent themselves for any further harm, moreover people were prevented from socially meeting friends or sporting with sport buddies (Robertson, 2020; King, 2020). Yet, this lockdown led to a resurgence of jogging as millions of people where finding ways to stay fit both mentally and physically. As the lack of sport alternatives have filled the parks globally with people running around in sports gear. Despite that, it was a chance for people to get away from the people they are in quarantine with in order to get some me-time, whilst others were seeking for social interactions (King, 2020). However, for millions of people —myself included— this escape to get out of the house became a personal lifesaver (Hattenstone, 2021; Murray, 2021).

Reflecting on myself, I can say that whenever I run I find myself in my own ‘peaceful world’. Calmness takes over and urges me to think about other things than the reality of the ongoing pandemic. While running I am  reconstructing the negative into something positive. Furthermore, it also creates a certain routine for the same recurring days. Running my mind out thus helps me to reconstruct my own happiness and it improves my ability to cope with the situation we are all in.

But I am not the only person experiencing positive effects, as the earlier mentioned mental benefits were widely praised by millions of new running enthusiasts. Escaping, by running, from the situation and clearing one’s mind in order to lift ones lockdown mood was one of the foremost reasons to keep running (Murray, 2021).

Moreover, the popularity of running has also led to a surge in sports shoes, gear and gadgets. Especially shoes and GPA application gadgets were highly in interest. Self-tracking apps for running were remarkably popular (Hattenstone, 2021; Bee, 2021). Quantifying oneself became an important part of millions of runner’s routines, as tracking the exact pace, distance, route and burned calories helped people to set goals. In my case, the amount of kilometres that I ran fuels a form addiction, to set higher goals but it also gives me a confidence boost. Earlier research from Lupton (2019) also showed that tracking oneself contributes in the knowledge, awareness and problem-solving of a body.

All in all, one can say that running in times of Covid-19 is in way related to survival as running became an escape for many millions of people around the globe during lockdown. This may not be in terms of hunting for food, but in terms of hunting down the moody demons inside of peoples head. 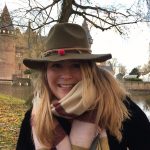 My name is Frederique Koenders, I come from The Netherlands. Currently, I’m doing my MA at Maastricht University.

Bee, P. (2021, March 13). The lockdown fitness gadgets we now can’t do without. The times. Retrieved from https://www.thetimes.co.uk/article/the-lockdown-fitness-gadgets-we-now-cant-do-without-lh8kd009j

Hattenstone, S. (2021, February 7). Why jogging is a lockdown lifesaver. The Guardian. Retrieved from https://www.theguardian.com/lifeandstyle/2021/feb/07/why-jogging-is-a-lockdown-lifesaver

King, R. (2020, June 29). The Coronavirus Economy: The resurgence of outdoor running during the lockdown. Fortune. Retrieved from https://fortune.com/2020/06/29/coronavirus-economy-pandemic-exercise-running-shoes-hoka/

Description: The running shoes are used for sport exercises.