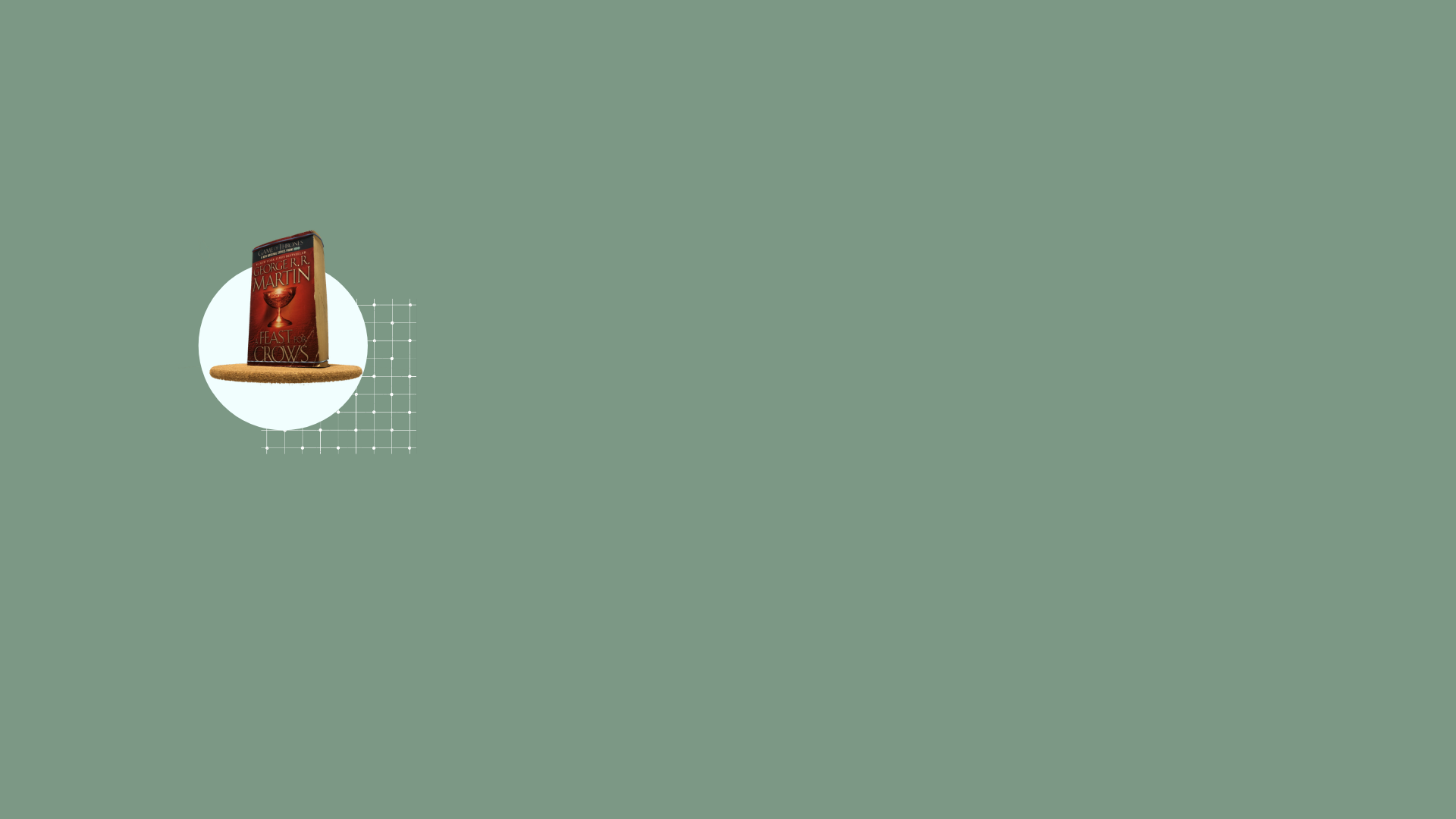 “A Feast for Crows” Book

This book entails the routine activity its user had during the first lockdown and the fragmented history of its owner. The book itself represents how epic fantasy fiction embeds simulations of the real and serves as an escape portal for its readers.

A Feast for Crows-George R.R. Martin by covid19digitalcollection on Sketchfab

Early in 2020, I spent most of my noon time in spring reading the book that this 3D model is taken from. It is a portal that transfers me into an imaginary world where I can escape temporarily from the reality of being locked up alone in a foreign country. As I turned the pages, my senses and feelings were immersed in another time and pace where I could almost feel the cold north wind piercing my skin on the Wall (location in the book). and the salty taste of air on Casterly Rock (ditto). Only the rustle sound the paper makes as I turn the pages and the warmth of the sun in springtime reminded me of where I was.

The first round of lockdown in Europe came in late March of 2020, yet, as a Chinese, my anxiety about the pandemic started even earlier. Non-stop virus related news kept bombarding my phone via Chinese and Western social media. Covid related tragedies, violence, and racism constituted the main picture of the online community. I tried to get away from this terrible nightmare but back then uncertainties about this contagious new virus were too much that I dared not to go back to China, to my family. I stayed in the Netherlands in a tiny studio all by myself, and with the quarantine restrictions, I barely left my place except for groceries.

Apart from study, I still had a lot of free hours to spend on my own. One of the ways that I tried to entertain myself was exploring my tiny room, and when one got to spend 24 hours per day alone by herself, trifle things that were once invisible became vivid: A roll of toilet paper would run out in seven days; one water filter needs to be changed every four weeks; 1000 skip rope jumping took me around ten minutes; and the first sunlight that dipped into my bed was 11:07 am before DST, which signaled the time to start my reading, another routine activity I set to myself. I would lie on my stomach on bed, reading.

As time passed by, I felt the warmth of the sun on my toes when in page 164, Jamie is standing as guards besides his father’s bier; the second day when it reached my back, Brienne is still searching for Sansa in page 200; the third day, when it was warming my shoulder, (page306) Sam is on a cold sea trip and eventually it landed on the page I was reading (page338) Cersi is plotting against her daughter in law. From time to time, I changed my position and continued reading until hunger forced me to come back from the story and get up to the kitchen.

A Biography of The Book

Just as what Harding has concluded  “the life of objects is no more nor less than the life of humans, of ourselves” (p. 8) as they entangled with users’ memory and history. When I unveiled the biography of my object, it was also a part of my life.

A close friend of mine from school recommended the fiction series of A Song of Ice and Fire and I started reading the first volume, A Game of Thrones, in Chinese version. In April of 2011, when the HBO series released its TV version, the book version also became popular in China and later that year, I found amazon.cn imported the English version (volumn1–4) with a decent discount and ordered the set without hesitation.  Back then, A Feast for Crows  was the latest one.

This book is a product of mass production, which makes it  hard to appreciate it from the aspects of its authenticity, its uniqueness and originality and the cultural context that it was created(Benjamin, 2002, p.103). In this sense, its aura becomes too vague to tell. But just as Latour (2011) argued, “if we stop reproducing, the very existence of the original is at stake”(p. 6). Moreover, as the object ‘lives’ with its user, unique marks and stories are carved into the object. They give new aura to this mass produced product.

There’s a Chinese saying, Reading thousands of books and traveling thousands of miles. Ever since I started traveling on my own, I always bring along with me a book to read while travelling. This book was in my suitcase or my backpack when I was on the bullet train to Beijing, the overnight flight to London, the road trip to Xinjiang and Taiwan, etc. As can be seen from the model, travelling leave the book wear and tear and some unknown stains. While the pages started to show its age, I still did not manage to finish it in these long hours.

When I came to the Netherlands, I took it with me, hoping to finish it during this long journey of study. Not until the Covid lockdown in March 2020 had I made up my mind to read it, and I finally put an end to this volume on an ordinary spring day which I now cannot recall. Once being read, the book is being used or consumed by me, and its “life” ends the moment I finish reading it. Now it sits quietly as a relic on the rack in my wardrobe. From time to time, when I have a glance at it, it triggers fragmented memories of the past years of my life, some are vivid while some are vague, in which I can find those belonging to the Covid times.

On Epic Fantasy and Its Societal Importance

In the world of Epic Fantasy, albeit the bizarre and strange encounters, it is built on part of the reality we know and in this fantasy world, one can find simulacra of the real (Stableford, 2005, p. 48). Just as McLuhan (1964) stated, “the ‘contents’ of any medium is always another medium.” (p. 1) One of the content settings that constitutes fantasy fiction is the fantastic legacy left by ancestors. Looking back to human history, fantastic elements can be traced to early methodology and folklore.

In the Chinese ancient texts (4th B.C.), Shan Hai Jing, or the Classic of Mountains and Seas, vividly compiled various mythic accounts of culture and geography in pre-Qin China, and it also depicted a lot of fantastic beasts. For example, xiè zhì（獬豸)，is a sheep and deer like beast with a unicorn. The text wrote that this beast knows good from evil and uses its unicorn to punish the person who is guilty. Another one, Qílín(麒麟),has a head of a dragon,  a pair of antlers, a body of a horse and a tail of a bull, and it breathes fire and roars like thunder. It is the beast that brings propitious omens which can still be found in statues not only in Chinese historical relics but also in many Chinatowns.

In the West, people are so familiar with ancient Greek mythology and Norse Mythology. Statues, paintings, and plays depicting figures and stories of them can be seen throughout historical records. Figures such as Zeus, Odin, Sphinx and dragons are so well known by people who do not share the same cultural background. They became the semiotic features of western culture that do not even need any annotations.

These mythic descriptions, Chinese or Western, were ways that ancestors built to make sense of  natural phenomena that their knowledge at the time were insufficient to understand. They became signs of the real shared as cultural memories of later generations. Later on these figures and stories about them are used by artists and revived  in fantasy stories, whether they are presented in text or on the big screen.

The genre of Epic fantasy, or high fantasy, was created by J.R.R. Tolkien(1892-1973) and represented by his works, The Hobbit and The Lord of The Rings, since the 1930s. Enormous ancient fantastic elements can be found in this genre. For instance, in The Hobbit, Orc and dragon can be traced in the Old English poem of Beowulf. And in A Song of Ice and Fire, dragons, sorcery, and the undead framed the key structure of the fiction.

Another key content in Epic fantasy is the setting of the Secondary World. It is a world that is different from the world we live in. Yet, the fiction world is, to some degree, a mirror reflection of reality. Even though it is self-coherent, has “an inner consistency of reality” (Tolkien, 1947, p. 34) and has logic and rules, it still, in some way, partakes of reality. In an epic world, it draws on characteristics and experiences of reality from a past era, the medieval age, and creates simulacra out of them. To name a few, Kings, Queens, Lords, and Knights that played main roles in the vicious Medieval age are also general characters in epic fantasy stories; and conflicts and wars are inspired by historical events of the time. By diving into an imaginary world with simulations of some aspects of readers’ experienced reality (though from a bygone period) and supernatural existence from ancient mythology,  readers’ minds manage to escape from the world they condemn.

It is not that the simulated world is better than the real, on the contrary, it can be worse. The protagonists are normally burdened with heroic missions and tortured by evils. It gives its readers a sense of relief when they close the book as they find the real world is not that tragic compared to that of the protagonists. Therefore, during the pandemic lock down, people started to recommend fantasy readings as an escapism remedy. And (science) fantasy reading is also approved by experts that it helps young people cope with anxiety and stress of living in Covid time. 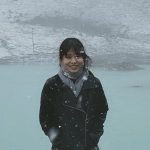 My name is Qinwen Zeng, I come from China. Currently, I’m doing my MA at Maastricht University.

Benjamin, W. (2002). The Work of Art in the Age of Its Technological Reproducibility. Selected Writings. Vol.3 1935-1938. Harvard University Press.

Latour, B. & Lowe, A. (2011). The Migration of the Aura, or How to Explore the Original through its Facsimiles. In Bartscherer, T. & Coover, R. (eds) Switching Codes: Thinking Through Digital Technology In The Humanities And The Arts, pp. 275–98. University of Chicago Press.

McLuhan, M. (1964). Fragments from The Medium is the Message. Understanding Media. The Extensions of Man.

Name: ‘A Feast for Crows’ Book

Description: the Book is used for reading